English ivy (Hedera helix, ginseng family, Araliaceae) is so common as to be invisible. You see it climbing high on buildings or covering a vacant lot, the handsome five-pointed dark green leaves, making a thick verdant mat. To me, English ivy high up on brick walls represents old established places, rich in history.
In fact, English ivy has so much history I divided writing about it into two blog posts. This one is about the plant's biology, next week, the folklore.

English ivy, which they call common ivy in England, and is often just called ivy, is a vine from central Europe, not only England. There are 12 to 15 other species in the genus Hedera, native across Eurasia.

Common ivy came to the attention of Europeans long ago. They could hardly miss it; common ivy grows up trees in European forests, covering them. It becomes a huge woody plant; the weight of wood and branches can break small trees. Furthermore, the dense foliage cuts off bigger trees from the sun, which can be fatal. If that isn't enough, stems can wind around a tree trunk and, as they increase in size, slowly strangle the tree. Finally, common ivy spreads across the ground, making a thick ground cover that easily kills small plants.

English ivy is evergreen; the plant holds its leaves during the winter. Individual leaves live three or four years. So if you are a plant under English ivy, you don't get to see the sun even in winter or early spring.

Most vines grow by wrapping around a stem or by sending out tendrils that wrap around whatever they are climbing. English ivy produces tiny roots along the climbing stem that attach with little suction cups (like the feet of geckos) to the surface. These are variously described as difficult to remove and easy to remove. I have an established English ivy plant along my wooden fence that I am steadily cutting back. This summer I pulled it off the outside of the fence. It wasn't particularly difficult to remove--the little rootlets pulled off Pop! Pop! Pop!--but the fence doesn't look very good. On the other hand, tales of English ivy damaging walls are apparently much overstated. If the wall has a crack, like any roots, the English ivy will reach inside and, in growing, worsten the crack. But the climbing roots don't do structural damage. And the extra layer on the outside of a building provides additional insulation.

The commonly-seen English ivy, growing over a trellis or along the ground, is the juvenile form. When English ivy has climbed to the tops of trees--60 feet up is no problem--and emerges, usually about 10 years old, into the sunlight, it will flower. The flowering stalk, sent up from the juvenile climbing form, is shrubby and has quite different leaves. Adult leaves are not 5-pointed, and are softer, more uniform green. The flowering stalks emerge from that. The flowers are yellow-green and not very dramatic but appeal to bees and butterflies. In England, flowering is in the fall, making the flowers important late season food for insects. In the U.S., it has a wider range of flowering times (see FEIS page link ). I was once told that in North America English ivy doesn't flower. It certainly does, but the plants do have to get big and old and reach full sunlight to flower, which means lots of plants will not flower or haven't flowered yet in the U.S. Secondly, the characteristic English ivy leaves are not associated with the flowers, so people may not recognized that it is flowering. With the adult foliage, the shape is more like a tree, so Europeans may say ivy-tree, which sounds contradictory, but isn't.
The fruit are small and round, black when ripe. They generally spend all winter ripening. Lots of European birds eat them, but only a few North American birds.

English ivy can be a long-lived vine. Currently, there is one in Belgium that is reliably aged at 171 years.

With and without flowers, English ivy has become a serious invasive plant in much of North America. The Missouri Plant Finder says, several times, "Invasive; do not grow this plant!"; the North Carolina Agricultural Extension makes the same argument, offering a list of plants to use instead.

Europeans used English ivy medicinally. Today it is taken for coughs and throat problems, although the medical community does not endorse those uses, citing insufficient study. English ivy leaves, berries, and wood contain triterpenoid saponins, polyacetylene, and other compounds that might be effective medicinally. These are in all the tissues (some sources say more in the berries, some say less). But medicines are often poisons. Consuming leaves or berries of English ivy will make children and pets quite sick, producing vomitting, diarrhea, and even convulsions and other neurological responses.

Some people have strong allergic reactions to English ivy; it can cause severe contact dermatitis. The allergens are falcarinol and didehydrofalcarinol. These are found in carrot family plants, so people with those allergies are likely to react to English ivy.

Many of the traditional references from Europe refer to yellow berries. Most common ivy plants have berries that are black when ripe, but the plant has three subspecies and one has yellow berries. That is poet's ivy or Italian ivy (Hedera helix ssp. poetarum) found in Italy, Greece, Turkey, and the Balkans. I saw a site that said it was extinct, but the Denver Botanic Garden has a plant in their collection. It may be rare, however. Virtually all the English ivy plants you will encounter outdoors in the U.S. are Hedera helix ssp. helix, with black fruit.

English ivy is a big, woody vine with handsome leaves. Imported by settlers, it found North America to be very good habitat and spread into places where it was not planted. It killed some trees in Europe, but it is more destructive in North America because it has few natural enemies (check the leaves for insect holes or disease spots! Metcalfe's review of common ivy in England has a page and a half listing insects and mites which feed on it there). English ivy will grow well in a pot or indoors, so it is highly recommended that, since it is so invasive, that in the U.S. (and Australia and New Zealand) it should be confined to a flower pot. It makes a very attractive house plant (photos: link).  English also makes elegant bonsais (photos: link). As with many plants, English ivy is wonderful in the right place, rather horrid in the wrong place. 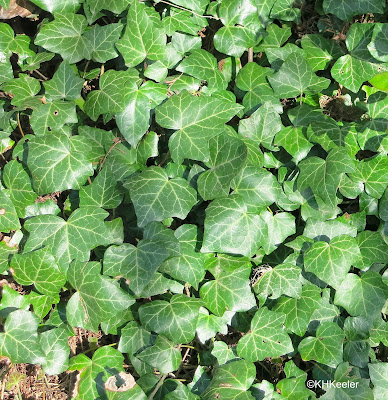